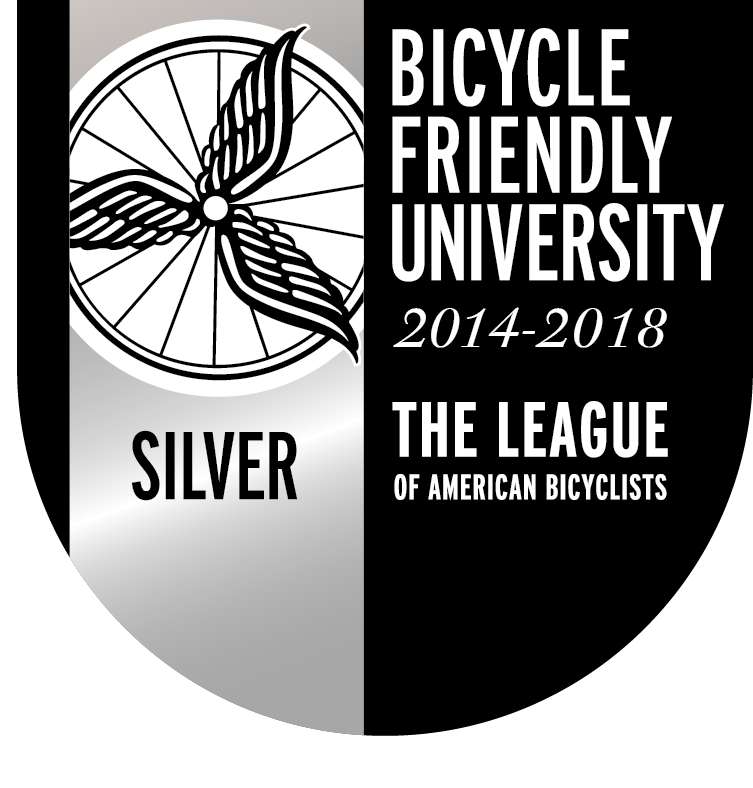 With the announcement of 33 new and renewing BFUs today in 20 states, the University of Iowa joins a cutting-edge group of colleges and universities from across the United States transforming their campuses and the communities around them. There are now 100 BFUs in 37 states and Washington, D.C.

“We are thrilled with our Silver Bicycle Friendly University designation and would like to thank the League of American Bicyclists for their support and recognition. The feedback report from our first application was very helpful and we used it as a framework for improvement. The Silver designation reflects the hard work of the students, staff and faculty on our Bicycle Advisory Committee and definitely bolsters the visibility and importance of the bicycling culture at the University of Iowa,” said Liz Christiansen, director of the UI Office of Sustainability.

Many University of Iowa students, faculty and staff rely on bicycling to and from campus as an affordable and healthy means of transportation.  The UI encourages bicycling and provides amenities such as bicycle repair stations and tune-up events to support safe bicycling.

The UI moved from a BFU Honorable Mention designation in 2012 to the Silver designation this year.

“We have worked hard to improve the bicycling environment on campus over the last few years and the Silver designation recognizes these efforts. We will focus our work, particularly in the areas of bike planning and infrastructure, to make the UI even more bike-friendly in the future,” said Andrew Lynch, chair of the UI Bicycle Advisory Committee and graduate student in the UI School of Urban and Regional Planning.

The League’s  BFU application evaluates applicants’ efforts to promote bicycling in five primary areas: engineering, encouragement, education, enforcement and evaluation/planning. Moving forward, the UI will have access to a variety of free tools and technical assistance from the League. The City of Iowa City has already achieved a Silver Bicycle Friendly Community, and is working collaboratively with the UI on bicycle planning. The UI and Iowa City are developing plans and seeking grant funding for a bike share program that could be used by both students and the community.

Since the first application in 2012, the UI Bike Advisory Committee worked with several campus departments and organizations such as UI Parking and Transportation, the Office of Sustainability, the UI School of Urban and Regional Planning, UI Recreational Services, UI Student Government, UI Staff Council, UI Wellness, UI Housing, UI Public Safety and others to promote and support bicycling on campus. Community groups such as Think Bicycles, the Iowa City Bike Library and Iowa Bicycle Coalition have also supported the university’s BFU designation. Some recent advances to support biking on campus include:

See a list of all current BFUs here, and a list of 2014 awardees here. To learn more about the BFU program, visit the League online at www.bikeleague.org/university.