Why care about food waste?

University of Iowa's 20/20 goals include decreasing the production of waste to achieve 60% waste diversion by 2020. Reducing food waste is essential to reach that goal. According to 2012 Natural Resources Defense Council report, Americans trash 40 percent of our food supply every year, valued at about $165 billion. Just a 15 percent reduction of losses in the US food supply would save enough food to feed 25 million Americans annually. Reducing the food mass in our landfills would have significant economic, social, and environmental befits. 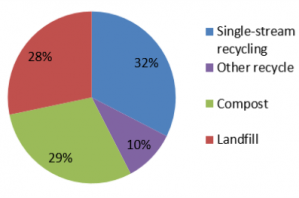 In 2007, the University of Iowa and the Iowa City Landfill & Recycling Center began a pre-consumer food waste composting pilot project that has since grown into a University-funded program composting over 800,000 pounds of food waste each year. The original study and pilot were initiated by a student research project for Prof. Jerry Schnoor's class, Engineering for a Sustainable World.

When the compost is ready, some is returned to campus as a soil amendment for the Student Garden and the rest is sold to the public as one component of Iowa City Community Compost.

See Food: Too Good To Waste strategies from the City of Iowa City: